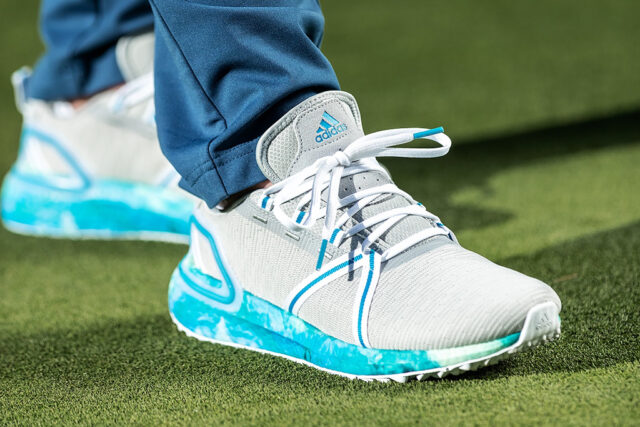 Adidas has unveiled a new footwear option that will allow golfers to spend more time on the course with ease.

Called the Solarthon, the new silhouette is an ultra-lightweight and comfortable shoe that is designed to keep the wearer feeling energized. This is due to the silhouette’s full-length boost midsole, which provides comfort, and the shoe’s Fishcale Traxion outsole that promotes grip and stability.

It has also included a film around the edges of the uppers, creating a water resistant guard, which will help golfers power through dew present during the early hours of the morning. Furthermore, the limited edition piece also includes Primeblue textile uppers — a high-performance and sustainable material that is made from yarn and contains 50 % Parley Ocean Plastic. The upper is also equipped with additional reinforcements to keep golfers feeling secure and in place.

The Solarthon comes in a gray, blue and white colorway. The shoe was no only created to keep golfers comfortable, but was also designed with the current season in mind. The shoe itself was inspired by the summer solstice — a day that motivates most golfers to make the most of each moment of sunlight.

Masun Denison, global director of footwear, Adidas Golf, said, “Golfers get excited this time of year because there are more hours of sunlight, which ultimately translates into the opportunity to play more of the sport they love. We wanted to capture that excitement and eagerness to maximize their time on the course, so we created this lightweight, comfortable option to help them keep playing, even if it’s from dawn to dusk.”